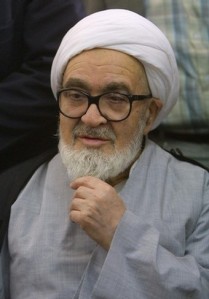 McClatchy News is reporting that one of Iran’s most senior clerics, Grand Ayatollah Hossein Ali Montazeri, has called the election rigged.  He has also criticized the government crackdown on Mousavi supporters.   Montazeri himself was a leader of the 1979 revolution and a one-time rival to the Supreme Leader Ali Khamenei for the nation’s top position.

And yes, he has his own website.  Got Farsi?

TEHRAN, Iran — Supporters of Iranian President Mahmoud Ahmadinejad and his main rival in the disputed presidential election, Mir Hossein Mousavi, massed in competing rallies Tuesday as the country’s most senior Islamic cleric threw his weight behind opposition charges that Ahmadinejad’s re-election was rigged.

“No one in their right mind can believe” the official results from Friday’s contest, Grand Ayatollah Hossein Ali Montazeri said of the landslide victory claimed by Ahmadinejad. Montazeri accused the regime of handling Mousavi’s charges of fraud and the massive protests of his backers “in the worst way possible.”

“A government not respecting people’s vote has no religious or political legitimacy,” he declared in comments on his official Web site. “I ask the police and army personals (personnel) not to ‘sell their religion,’ and beware that receiving orders will not excuse them before God.”

As many as three more protesters were reported killed in clashes during Tuesday’s opposition demonstration in Vanak Square — adding to eight who were confirmed killed in Monday’s protests.

Foreign news organizations were barred from covering Wednesday’s demonstrations, and the source of the report of the latest deaths was a witness known to McClatchy, who asked that his name not be used for his own security.

Tehran residents, who spoke to a McClatchy reporter on condition that their names not be published, said there was widespread intimidation by thousands of members of the Basij, a hard-line Islamic volunteer militia loyal to the Islamic regime.

Nor were reports of violence limited to the capital.

In a voicemail to U.S. government-funded Radio Farda, and posted on the Web site of Radio Free Europe/Radio Liberty, a woman who identified herself as Zeinab from the city of Shiraz said students gathered in front of university dormitories and protested peacefully.

“The Guard attacked the university and started beating the people. What are the people supposed to do? They are forced to react,” she said, referring to the elite Revolutionary Guard, a parallel military force that’s controlled by Khamenei.

Montazeri’s pointed public comments provided fresh evidence that a serious rift has opened at the top of Iran’s powerful religious hierarchy after Supreme Leader Ali Khamenei endorsed the official election results and the harsh crackdown against the opposition.

A leader of the 1979 Islamic revolution who’s often feuded with Khamenei and once vied with him for the supreme leader’s position, Montazeri accused the government of attacking “the children of the people with astonishing violence” and “attempting a purge, arresting intellectuals, political opponents and scientifics.”

“He is questioning the legitimacy of the election and also questioning the legitimacy of (Khamenei’s) leadership, and this is the heart of the political battle in Iran,” said Mehdi Noorbaksh, an associate professor of international affairs at Harrisburg University of Science and Technology in Pennsylvania. “This is very significant. This is huge support for Mousavi and the demonstrators on the reformists’ side.”

In an attempt to defuse the crisis, the 12-member Guardian Council, part of the ruling theocracy, announced that it would conduct a partial recount of the balloting, which the government said Ahmadinejad won with more than 24 million votes, to 13 million for Mousavi.

Government-funded Press TV, an English-language news service, reported that at a meeting Tuesday with the council and the candidates’ representatives, Khamenei said a recount could take place if an investigation found there was a need for one.

“Those in charge of supervising the elections are always trustworthy people, but this should not prevent an investigation into possible problems and clarifying the truth,” he was quoted as saying.

The recount announcement, however, didn’t appease Mousavi, reform presidential candidate Mahdi Karroubi or their supporters. Tens of thousands filled the streets of Tehran for a fourth day carrying signs and wearing scarves and ribbons of Mousavi’s trademark color of green to demand that the results be annulled.

“We are ready to recount those boxes that some presidential candidates claim to have been cheated,” council spokesman Abbas Ali Kadkhodaei told Iranian journalists. Despite a lapsed deadline for complaints, “the body is ready to receive complaints and probe into the issue and build more confidence,” he said.

It wasn’t clear how many ballot boxes — or which ones — would be recounted. Mousavi has demanded an annulment of the vote.

President Barack Obama said he had “deep concerns about the election,” but added that “it’s not productive, given the history of U.S.-Iranian relations, to be seen as meddling.”

The Iranian government, meanwhile, moved to extinguish international news coverage of the crisis. The British and Czech charge d’affaires, whose country holds the rotating EU presidency, were called to the Foreign Ministry to hear complaints of “interference” in Iran’s internal affairs, Press TV reported.

At least eight demonstrators were shot dead and 28 others wounded Monday by members of the Basij, according to workers at Tehran’s Rasoul Akram Hospital, where a video posted on YouTube showed hundreds of doctors and nurses protesting the election results Tuesday.

The Ministry of Culture and Islamic Guidance issued the ban on foreign news coverage of rallies in Tehran, revoked the credentials of those with temporary visas and ordered them to leave the country as soon as possible. Cell phone service was cut in the city.

The ministry also prohibited news agencies and foreign broadcasters from distributing video and pictures — a move that could precede a more violent government crackdown. However, details of the Ahmadinejad and Mousavi rallies reached the outside world via Twitter, YouTube and other Web networks.

Video that demonstrators shot on cell phones showed comrades carrying away a severely injured man in Vanak Square, the site of nightly clashes. Another video clip showed large fires in the traffic circle around the square.

Press TV said tens of thousands of people waving Iranian flags, carrying portraits of Ahmadinejad and Khamenei and chanting “We are of the same nation” attended the pro-Ahmadinejad “unity rally” at Vali-Asr Square.

It quoted rally organizers as endorsing the Guardian Council’s review and urging security forces and judicial authorities to take “decisive action” against “efforts to break the law, fuel chaos and spark hooliganism.”

The statement also called for the arrest and punishment of the “main perpetrators of the recent plots,” and accused the U.S., Britain and Israel of “plotting against the government and giving media support to enemy groups, rioters and social and political hooligans who are trying to fuel chaos in the Islamic Republic.”

Press TV reported that a number of reformist politicians had been arrested, including former Vice President Mohammad Ali Abtahi, and accused of “orchestrating” post-election violence.